Predators is an upcoming American science-fiction horror film directed by Nimród Antal, and starring Adrien Brody, Laurence Fishburne, Topher Grace, Alice Braga, Danny Trejo and Derek Mears as the “Classic Predator”. The film is a sequel to Predator (1987) and Predator 2 (1990). Producer Robert Rodriguez stated that he named the film “Predators” in relation to how the second film in the Alien franchise was called Aliens. The title Predators is intended to have a double meaning, in that it refers to both the film’s alien creatures, as well as the group of humans who are going against them. 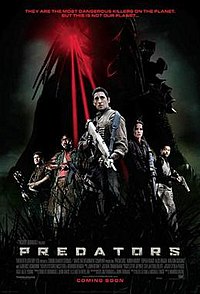