Almost 1,000 amateur and seasoned cyclists competed in the different categories of the first ever criterium race at the McKinley West. A blockbuster among race enthusiasts, the slots were filled out within the first two hours of opening the registration. Another thousand –composed of families and friends– attended the bike community day in Uptown Bonifacio and enjoyed various exciting cycling activities such as ramp and cone courses, carless bike lanes, assembling and disassembling a tire, and photo booths.

The participants were treated to snacks and exciting raffle prizes such as bluetooth speakers, foldable bikes and even full-fledged trampolines. The main treat, however, are four all-expense-paid trips to London – two of which were given to the grand prize winners of the Road Bike Male and Female Elite Open categories – George Oconer, who rode for the Philippine national cycling team in Le Tour de Filipinas; and Marella Salamat, gold medalist in the women’s individual time trial event in the2015 Southeast Asian Games. 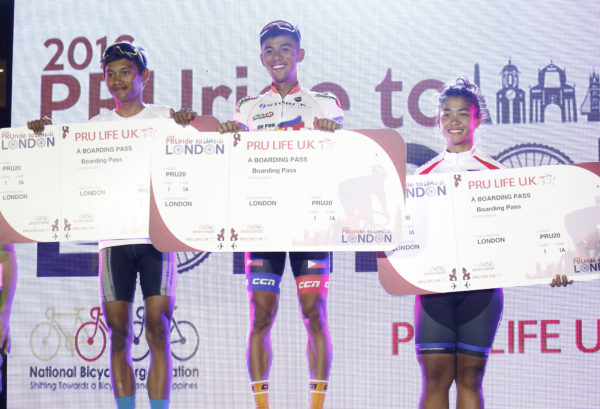 The Company partnered with the National Bicycle Organization (NBO) and the Metropolitan Manila Development Authority (MMDA) for the event, which aims to promote safe cycling in the Philippines. All proceeds raised will be used to fund NBO’s bike-friendly initiatives in road safety, bike lessons, and bike commuting. Moreover, part of the proceeds will fund bike projects such as racks and lanes in the cities of Taguig, Pasig, Makati, and Marikina. The Company likewise donated helmets to the MMDA which the agency can use in its cause to promote safe cycling.

During the ceremonial turnover of the donations, Pru Life UK President and Chief Executive Officer Antonio De Rosas thanked the partners and participants in making the first PRUride to London a success. Aside from sharing his experience at the 2014 Prudential Ride London, he also highlighted the need for a more bike-friendly community here in the Philippines.

“We have a thriving community of cyclists here in the country, but the need to create a bike-friendly environment is still here. We hope to see the day when we won’t have to fear anymore of getting hit by speeding cars or parking our bikes in open spaces, and when more people would appreciate the benefits of cycling as a means of commuting,” he said.

“Through programs such as Pru Life UK’s PRUride to London, we hope to support and increase awareness on safe cycling so we can all work towards having a safe and environment-friendly community not only for us but also for our children and the generations to come,” he continued.

Prudential Ride London is the world’s greatest festival of cycling, with more than 100,000 cyclists expected to participate during the weekend of 28-30 July 2017. The festival was developed by the Mayor of London, London & Partners and Transport for London in partnership with Surrey County Council. The event is managed by the London & Surrey Cycling Partnership (LSCP).

It combines the fun and accessible element of a free family ride in central London with the excitement of watching the world’s best professional cyclists race. Taking a cue from the London Marathon, amateur cyclists also participate by riding a 100-mile or 46-mile challenge on the same closed roads as the professional men, with the added incentive of raising money for good causes. The best action is broadcast live on TV both on BBC TV in the UK and internationally.

PRUride to London is part of the celebration of Pru Life UK’s 20th anniversary in the Philippines. In 1996, the Insurance Commission granted the British subsidiary a license to operate and sell life insurance in this country. Since then, Pru Life UK has expanded its reach to over 80 branches in the Philippines, with the biggest life agency force of 16,000 licensed agents, and has emerged as one of the top five life insurers. Pru Life UK is headquartered in Uptown Bonifacio, Taguig City.