MANILA, 25 NOV. – AirAsia Zest’s anticipated Piso fare is back again, this time in conjunction with promo seats available throughout AirAsia and AirAsia X’s extensive route network throughout the region and beyond.

AirAsia Zest Piso seats are available for booking at www.airasia.com from today until 1st Dec 2013. Guests will be able to travel from 5 May 2014 up to 31 January 2015 with all-in promo seats starting from as low as Php 353.92 for one way including applicable taxes and fees. 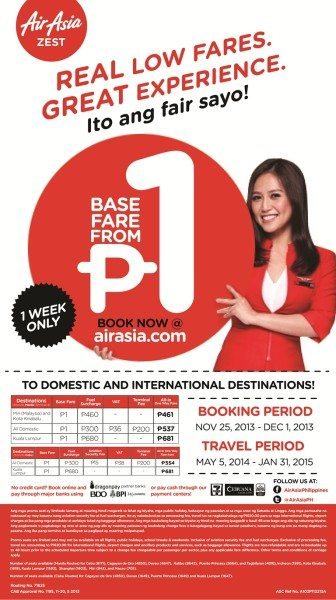 Joy Caneba, Executive Vice President and Chief Operating Officer of AirAsia Zest said, “Now is the perfect opportunity for our guests to connect from many places conveniently as we continuously add new routes and increase frequencies into our network. Exciting deals also await those who would like to travel overseas with promo fares from our Manila and Cebu hubs to various international destinations.”

AirAsia Zest is also offering promo fares for international routes from Cebu to Kuala Lumpur and Manila to Kuala Lumpur, Kota Kinabalu, Miri (Malaysia), Macau, Incheon and Shanghai from as low Php461 one way and including applicable taxes and fees.

Promo seats via AirAsia hubs operating in Kuala Lumpur, Penang, Johor Baru, Kuching and Kota Kinabalu are also available in line with Visit Malaysia Year 2014, as there will be many international travellers who will arrive into Malaysia.  International destinations featured in this AirAsia regional campaign also include Singapore, Jakarta, Bandung, Bangkok, Hatyai, Surat Thani, Phnom Penh and many others.

AirAsia X is also offering low fares on long haul routes, which include newly launched destinations of Nagoya, Adelaide, Male, Colombo and Busan. Guests on AirAsia X flights may book online and enjoy prices from as low as Php2,197 on economy and Php9,087 on premium from Kuala Lumpur.

“AirAsia Zest’s new direct flights from Cebu to Kuala Lumpur starting December 1 will enable travellers from Visayas region to as far as those from Mindanao via our daily flights from Cebu to Cagayan de Oro and Davao to take advantage of this promo fare and benefit from AirAsia’s vast network across all Asean countries including China, India and Australia,” Caneba said.

From traditional ryokans to manga-themed stays: Top 10 most wishlisted Airbnb Stays for your next trip to Japan

What you should expect in the all-new OPPO Reno8 T