Last November 12, Araneta Center Giant Christmas Tree was lit and mesmerized thousands of Filipinos who can’t help but be amazed at the grandeur of this 100ft tall Christmas symbol.

This year, the Araneta Group together with brand partner Coca-Cola teamed up for yet another unforgettable Christmas extravaganza, working together with the local government of Quezon City.

Right after the caravan, Coca-Cola Christmas Caravan entertain the guests through fun games and activities. There were food kiosk, and free sampling of ice-cold Coca Cola for everyone to enjoy.

Before the official tree lighting ceremony started, Kitchie Nadal also performed on stage. Then, the exciting countdown to the “it-moment” was joined in by officials from the local government, Araneta Center and The Coca-Cola Company along with Kim Chiu and Enchong Dee along with other personalities and celebrity guests.

Standing at almost 100ft. and with more than ten thousand lights and hundreds of stars and Coca-Cola Christmas balls, this year’s Giant Christmas Tree is a sight to behold with huge ribbons and colorful gift boxes serving as accents.

Unlike in the previous years, Coca-Cola gave the amazed partakers more reasons to light up happiness among themselves and others around them as it held the first-ever simulated lights and sounds show.

The evening festivities end with an amazing fireworks display.

But the celebration doesn’t stop there as Coca-Cola Christmas Caravan will still parade through key cities around the Philippines to light up our Christmas. 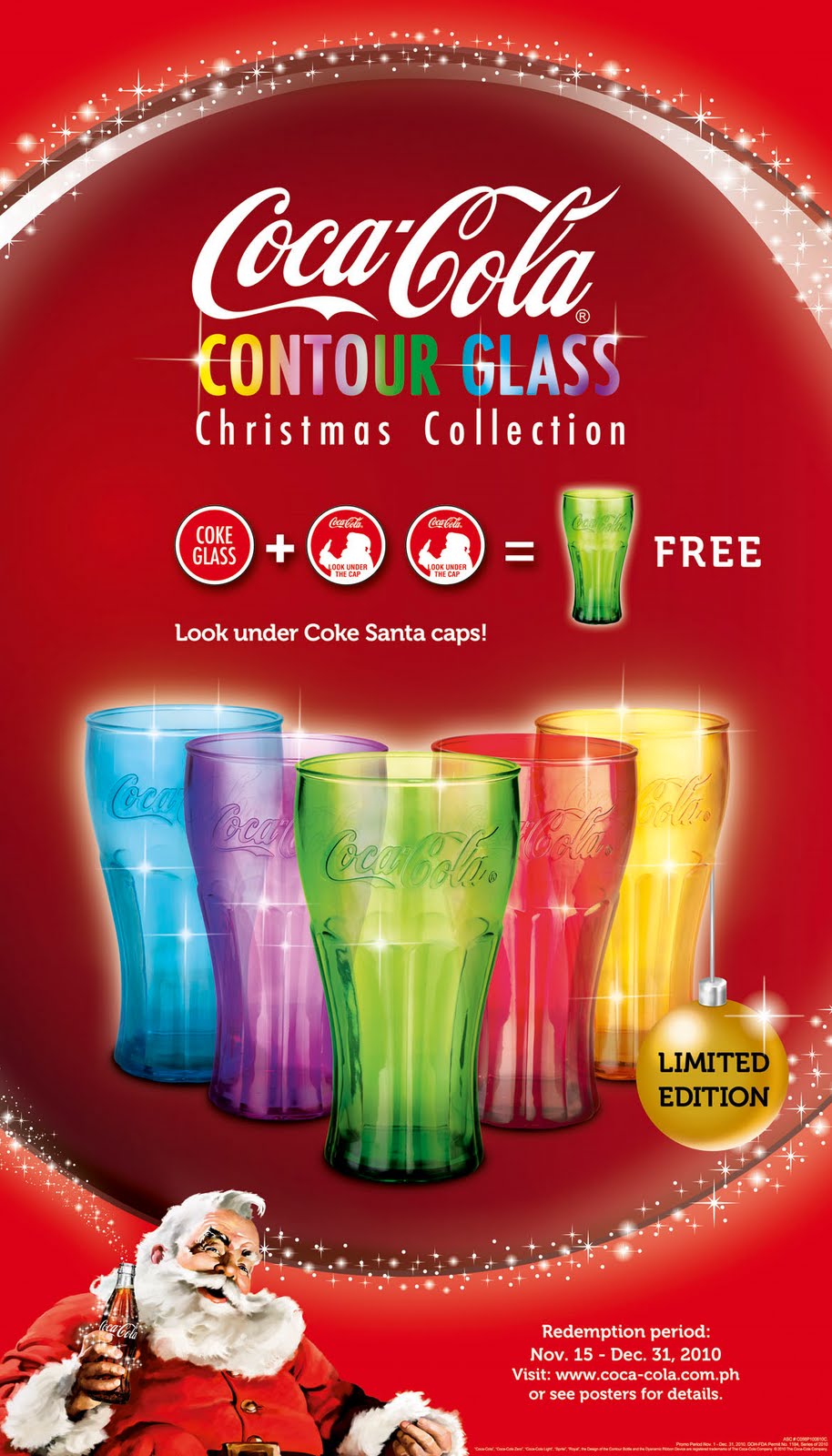 “The Coca-Cola contour glass is one of this season’s fun, ultimate merry must-haves that will surely complete our Noche Buena bonding and allow us to keep refreshing ourselves with the deliciously fizzy cola drink we all love. It’s available in five perky colors such as red, yellow, violet and green and the latest addition to the bunch, the aquamarine contour glass. Let’s make moments count this Christmas by sharing them together. Let’s make it more colorful with an ice-cold Coke and these cool contours,” says Coca-Cola ambassador Kim Chiu.

It’s so easy to take home all five Coca-Cola Christmas Contour Glasses: Buy Coca-Cola, Coke Light, Coke Zero, Sprite or Royal Tru Orange in any of the 500ml, 750ml, 1L, 1.5L and 2L packs. Look under the Santa cap for the “Coke Glass” text and collect 2 more regular Coca-Cola Santa caps and exchange these caps for one Coca-Cola Christmas Contour Glass from any 7 Eleven store, selected sari-sari stores or public markets and Coca-Cola Sales offices nationwide. You may redeem from November 15 to December 31, 2010 only.

“We are so happy that we are part of this very momentous affair – to light up happiness and open up a magical Christmas season with our favorite drink, Coca-Cola! That’s what this occasion is all about- for us to remember that we would always have Coca-Cola to energize our bodies with its delicious taste and fizz as we celebrate with the ones closest to our hearts and to refresh our spirits so we can all enjoy life’s goodness,” says Coca-Cola ambassador Enchong Dee.