Crowds of devotees and tourists from all over the country and the globe participated in the historical 50th year of canonical celebration of Our Lady of Namacpacan in Luna, La Union. The commemoration of the papal bull issued by Pope XXIII on the coronation of Our Lady of Namacpacan in 1959 is considered one of the nation’s cultural and religious highlights, drawing foreign and local tourists as well as Filipino balikbayans and members of the foreign and local media. The event, preceded by a concelebrated mass of 100 priests and archbishops from Ilocos and Laoag, was led by Apostolic Nuncio to the Philippines, Archbishop Edward Joseph Adams. It also marked the inauguration of Our Lady of Namacpacan Museum which preserves several solemn queenly attires of the Marian image, dating back from the 1800 to the present. 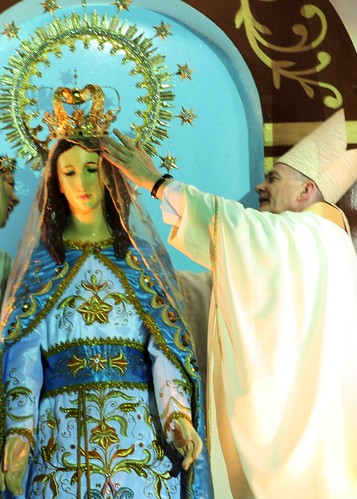 “Part of our country’s unique attraction to tourists is our culture of devotion to our Catholic faith, which is replete with cultural rituals, colorful feasts and warm celebrations that stand out from the rest of the world,” said Ace Durano, Secretary of Tourism.

Carved in Spanish soft wood, measuring 7-feet tall, the original image of Our Lady of Namacpacan stays at the 100-year old church of St. Catherine of Alexandria Parish, a significant pilgrimage site built in the 18th century by Augustinian Friars.

Recounting his personal miracle, Nestor Abuda Sr., Executive Secretary of the Parish Pastoral Council of St. Catherine of Alexandria Parish, said after a stroke left half his body paralyzed, he devoutly went to mass at the church everyday, never failing to kiss the feet of the image of Apo Baket, the Lady’s other revered name. After three years, the only hint left of his once paralyzed body is a slight limp as he walks around aided by a cane. Abuda went on to mention that the townsfolk also hailed the miraculous hand of the venerated Lady for protecting them from the recent storms which have wrecked havoc to surrounding areas in the North.

In his homily, Archbishop Adams chose to venerate Our Lady of Namacpacan for guiding the people closer to God, which he deemed as the reason for the celebration. The Catholic Church is known to be vigilant regarding miraculous claims made by people on their revered saints and images. These stories though have become part of passionate Marian devotions throughout the country.

With several tourists flocking to the celebration, the Department of Tourism (DOT) organized tours of Luna town, and surrounding areas of La Union, “Religious festivities in the country are always complemented with exploration of our heritage sites, beaches, coves and other interesting landmarks in the area,” shared Eduardo Jarque, Jr., Undersecretary for Planning and Promotions.

The town of Luna, a well-known stopover for those travelling in the North, used to be called Namacpacan, which means to offer food and shelter. The town is famous for various sites such as the century-old Watch Tower, a pre-Spanish defense post situated right by the shores of Luna beach. Apart from the magnificent structure, the beachfront is known for pebble picking, with various shiny colored stones lining up the shores.

“For the younger generation who come with their parents to join the religious rites, we provide other exciting activities, foremost of which is surfing,” said DOT Region 1 Director Martin Valera. 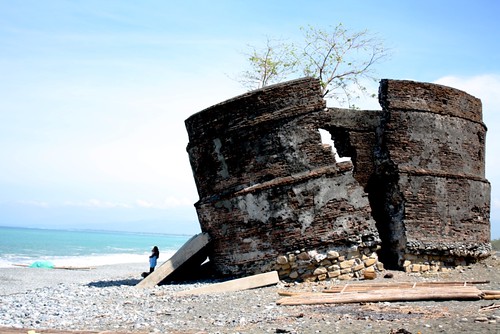 From October to February, beaches in Urbiztondo, La Union are abuzz with several surfing activities and events lined up for international and local wave riders, from beginners to the professionals.