Philippine independent cinema may well become a global phenomenon as it continues to delight critics & audiences around the world with the diversity, vitality & creativity of the Philippine film industry. These are artists & producers who can truly go places when it comes to evoking the essence of a unique cultural landscape without disregarding a defiant, homegrown sophistication that can only enhance the beauty & bravura in their work. 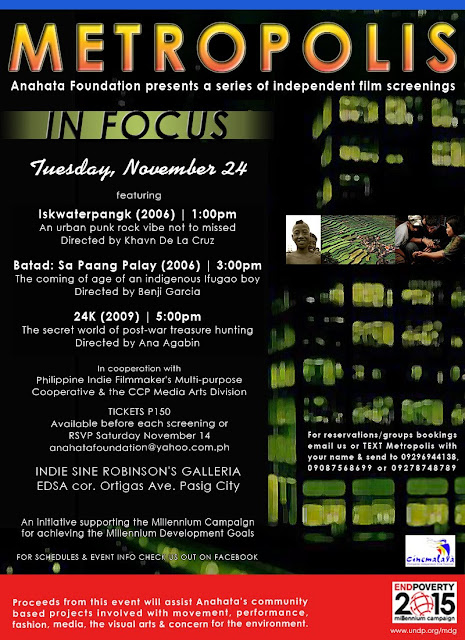 The Cinemalaya Independent Film Festival held annually at the Cultural Center of the Philippines has played a key role in representing & nurturing talent as well as encouraging the creation of new cinematic works with an unequivocal commitment to promoting enduring & contemporary film making. For the movement & the movers, there is also an emphasis on the personification of works ‘that boldly articulate and freely interpret the Filipino experience’ with fresh insight & artistic integrity.

Standing up for culture, entertainment & the world of art films, be sure to drop by Indie Sine at Robinson’s Galleria on Saturday, November 24 for Metropolis, the first installation in a series of indie film screenings. The event is being presented by Anahata Foundation, a community based artistic collective, UN Millennium Campaign advocacy partner & grass-roots production team with a shared interest in distinctive creative processes & discovering unique pathways for promoting Philippine culture & the arts.

Movement, performance, fashion, media, visual arts, and the environment are some of the ways we communicate to express & encourage the equitable transmission of ideas, values & aspirations essential to Community Cultural Development (CCD).

With an urban punk rock vibe ‘Iskwaterpangk’ (2006) directed by Khavn De La Cruz will play back to back with ‘Batad: Sa Paang Palay’ (2006) & Hawaiian Orchid Award nominee ‘24K’ (2009) as the third headliner, where in exploring tribal customs & the indescrutability of the human spirit, directors Benji Garcia & Ana Agabin together embrace an evolving pilgrimatic sensibility that might also serve as a metaphor for modern times.

Following in the footsteps of the recent Wi_Fi Body 4 ‘In Focus’ series at the Cultural Center of the Philippines, don’t miss this unique line-up of works, well regarded in the arts scene for the social issues explored as well as for their historic & cultural significance, educational focus & entertainment value.

Metropolis is made possible through the assistance of the Indie Filmmakers Multi-purpose Cooperative (IFC), the Cultural Center of the Philippines Media Arts Division & Cinemalaya. Session times are at 2pm, 4pm & 6:30pm with featured filmmakers dropping by to introduce their films & share industry insights as well as a live musical performance by The Brockas.