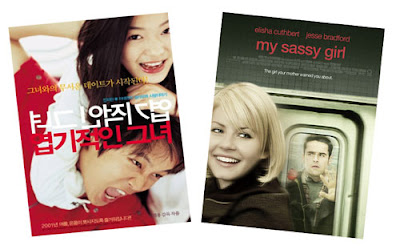 Since it is Labor Day in the United States and there are no tasks for us, I decided to watch the movie My Sassy Girl (American Remake).

My Sassy Girl is a South Korean romantic comedy film in 2001. The story is about a boy met a drunk girl on the train that changes his entire life. I heard that it is based on a true story of a man who initially posted a series of love letters on the internet.

Anyway, the American remake is very similar to its Korean counterpart. They have the same storyline but the American remake adapts the US culture. However, I like the Korean version more. There are many shortcuts on the US version. The movie feels a little rushed and it’s missing some more thoughtful points. Unlike the original film, the pace is slower to really build its emotions, to let us know the characters better.

Let me share to you two of my favorite clips in the Korean version.

Nothing beats the original version….